In another life, I must have been Baptist.

There is something about the energy, hope, and uplifting sense of spirit in a Baptist worship service. As I entered the sanctuary of a Jersey City Baptist church this past Sunday, with nine other members of my synagogue, I felt that sense of spirit. The church choir led us in song, furiously clapping their hands, dancing, lifting their arms up to the sky, as if God was reaching down and touching their fingertips.

We, 550 people of faith, were all there for the same purpose: to advocate for gun safety, affordable housing and education funding. Before the program began, as I walked down the aisle, I found myself bobbing my head and swinging my hips to the music of the choir. I loved it.

I approached my seat on the dais, the stage, where I would jot down a few notes for the opening prayer which I would lead. Upon grabbing my seat, I immediately wanted to get up and dance, grab the hands of some choir members behind me – people I didn’t even know – and rock out in praise of the good Lord. I decided to remain seated so that I did not block others’ view of the choir, so instead I just danced in my seat, swooshing my knees back-and-forth, clapping with joy, ignoring the fact that I still hadn’t fully planned the prayer which I would recite in front of the crowd just minutes later. It didn’t matter, though, because in that moment, I needed to dance, to clap, to pray with my body.

Outside, friendly people who served as security guards, opened doors for everyone to freely enter. They were in pedestrian clothes with yellow tape around their arms that read: “Security.” I wondered if they were credentialed or just members of the church who stepped up to volunteer.

I sat with colleagues in a synagogue to debrief about our program on Sunday. The doors were locked and I needed to wait for someone to buzz me in. Security was obviously a concern. When I got inside, we talked about what we did well on Sunday and what could have been done better. I acknowledged the glory of the choir, who led us so beautifully in uplifting song. I left the meeting, got into my car, programmed my cell phone’s GPS to lead me home, but not without also doing a search for a nearby place where I could grab a cup of coffee. I needed it.

I followed my GPS, listening to where she told me to go. Before long, I noticed that the streets began to have more potholes. The houses got smaller and closer together. Sidewalks were cracked and fences were broken. And then, just as I turned down the street which would lead me to my coffee, I spotted this: 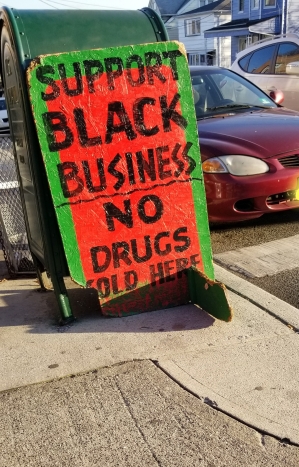 I turned down the street, heading away from the sign, which was posted outside a shop on the corner. I quickly found myself turning my car around, finding a parking spot, and heading towards the shop, where three black men greeted me outside.

“I just saw your sign and I wanted to support you,” I said to them.

One man, presumably the shop owner walked inside with me. It was a tiny shop. Inside were two children. One of them, perhaps a teenager, was smoking a cigarette. The entire shop smelled like a mixture of cigarettes and musty incense. I headed towards the refrigerator, where I would look for a calorie-free, caffeine-free option. As I reached into the cold fridge, I took note of my expensive Calvin Klein coat.

“No, thanks. I just wanted to grab a drink. Here, I’ll take this one. How much?”

In my head, I honestly thought that he would jack up the price. Two dollars, at least, or maybe $2.50 for this bottle of flavored sparkling water.

“Cents?” I said silently in my head. I thought to myself how silly that was, that he should at least charge a dollar. And then I thought that maybe the other people buying a sparkling water might not be able to afford it.

“Keep the change,” I said to him, giving him a dollar bill.

Before walking to my car, I snapped a picture of their sign, trying hard to act as if I was checking my phone, so as to not embarrass them. I felt like such a snob taking that picture.

I asked the guy standing outside which street we were on, since there were no street signs. Once I got in my car, I wanted to head in the right direction, towards my coffee, which I still craved.

I made a left, and then a right, and then went straight past the coffee place, which was under construction. I said to myself, now giving up on my coffee, “It’s a good thing I stopped for this sparkling water.”

On my way home, I began thinking about the ways in which the media, publications, society, songs, culture, you-name-it have taught me to see people of color as different, as scary, as unsafe.

It saddens me that a shop owner felt the need to put up a sign like this, a sign which conveys that not only is business suffering, but also that it is assumed that nefarious activities happen there.

I now think back to my time in the Baptist Church. So wrapped up in the majestic songs of praise, I felt little difference between me and those church choir members. As I lugged my Coach purse in tow, I was completely oblivious to the socioeconomic differences between me and many of these people in church. As I walked down the aisle that day, skipping along to the glory of the music and as I sat with fellow NJ clergy on the dais, the church’s stage, I was not aware of the difference between my skin color and so many of them.

But maybe I should have been.

Because although there is not a difference between us, let’s face it, there still is a difference. We have a long way to go to acknowledge those differences, which will help us pursue a time when equality and justice will reign.

Until then, I will marvel in my naivety as I pray with my soul sisters. And I will dance with my Baptist friends as we, hand-in-hand, celebrate the glory of God with trust and faith in a more hopeful and colorful future.