One year ago today was the day that my then 17-month-old daughter grabbed my piping hot cup of tea off the counter. It came crashing down upon her, trapping boiling hot water in her onesie. It felt like one of those scenes in a movie that happens in slow motion because I watched it happen, tried to stop it, and was unsuccessful at preventing her from experiencing the pain she would go through in the weeks and months to come. My other daughter witnessed the scene, glass shattered on the floor, as I called the doctor in one hand and stripped my daughter’s clothing with the other. It was the scariest thing I’ve ever witnessed. You never want to see your children in pain. She let out the most piercing cry I have ever heard. If I close my eyes, I can hear her screaming all over again.

The last few weeks have been difficult for me. More than likely this was because I knew I was approaching this anniversary and I feared that I would somehow relive it painfully again. I am not overwhelmed with guilt; I know that accidents happen. But there’s something to be said about approaching that one-year anniversary and remembering where I was on that traumatic day.

It was June 20th, 2017, the first day of my 10-day vacation. A Tuesday. To be honest, I don’t even remember what I had planned for my vacation, since I would tend to my daughter’s every need for the entirety of said “vacation.”

Immediately after the accident, I dropped off my older daughter at the shul where I work. Thank God for good colleagues and friends. I quickly rushed my younger daughter to the local ER, where they spent so much time taking down information and were slow to help relieve her pain. I remembered going to the same hospital to deliver her, only then it was I who was painfully crying. I’d rather be in labor twofold all over again than helplessly watch my daughter this way.

We waited and waited. She cried as I embraced her with every fiber of my being. I fed her bananas, challah and crackers and tried to distract her with an iPad that I threw in my car last minute. Eventually we met with a doctor, who told us that she’d be okay. They would send us home with some ointment or cream that night. I was so relieved.

Just in case, though, the doctor took a picture of my daughter’s burns and sent them to the best burn unit in the state for a second opinion. The burns went all down her chest, covered the left side of her face and ear, and bubbled over on her left upper arm. We received word from those doctors that we should be rushed by ambulance to the burn unit and she would need an IV to ensure she was properly nourished. And to think the ER doctors were going to send us home.

The ambulance driver was able to boost my cell phone with some more juice on that 40-minute trip to Livingston, which was helpful for contacting family. And the little one? She was the cutest and the most well-behaved patient. And by then, the pain medicine was starting to kick-in. Thank God.

On the way to the burn unit, the medic prepared me for what would happen to her:

“They will separate your daughter from you and she will go into a room. They call the room “the tank.”  There, they will wash her body and put bandages all over her wounds. The process is very, very painful and difficult to watch, so you will not be allowed to go into the room with her.”

I said to myself:

“I’ve been a chaplain. I’ve seen pain. I can take this. And my daughter cannot be alone! I’m sure I can talk my way out of this rule.”

For once, I was not able to talk my way out of this rule. And I’m not sure I would have wanted to, as her guttural screams echoed from “the tank” throughout the hospital hallway and pierced through my soul. My maternal instincts or love could not protect her from this.

As the crying slowly diminished, I knew they would soon bring her to me. And when they did, she looked like a cute, little baby mummy, bandages wrapped around her. 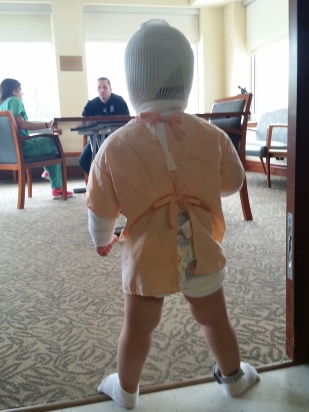 The doctor came in.

“I would prepare yourself for being here for about a week to 10 days.”

And that’s how long it was. 10 days. The entirety of my vacation.

During those 10 days, we learned so much. We learned that severe burns, like the 2nd and 3rd degree ones on her body “peak” at 36 hours, which is why the ER doctor was ready to send us home because they didn’t “look bad” immediately after the accident. We learned that a high-protein and high-fat diet is what the body needs to heal burns. We learned how quickly you can build community in a hospital of strangers when you spend your days and nights with other parents and people who are going through the same thing. We felt the love, too, as our own community lifted us up through prayer and matzah ball soup.

A couple of my colleagues came to say a prayer for us. It was then that I felt the power of my own rabbinic hospital visits, now being on the receiving end.

When we were discharged, her wounds were just at the very beginning of recovery. In fact, it’s been a year, and she still is not healed completely. She still

wears a cute, but constricting and hot compression vest for 23 hours each day, to smooth out her skin. The worst area on her upper left arm is still visibly wounded. We still have to put cocoa butter on her burns three times a day, massaging the worst part to “even-out” the skin. She still needs to be careful in the sun, so I’ve stocked up on sunscreen and we’ve got plenty of wet suits to cover her skin for water play at camp. But for the most part, thank God, she’s healing nicely and I’m able to continue drinking a hot cup of tea without worry…in June.

Will she need surgery one day? Only time will tell. And this much I do know: Time indeed heals wounds.

My anticipation of this dreadful day was not so bad after all. For the most part, I focused mainly on my older daughter’s “graduation” from Nursery School, which took place today, too. I had thought that I wanted to write this blog post last night because I didn’t want to take away from the older one’s celebration. Today would be “her” day. No need to remind anyone of where we were a year ago, especially if I’m the only one who remembers. But instead, writing this today, on the anniversary of the younger one’s accident and on the day of the older one’s graduation from school, reminded me that life goes on, that time does heal wounds, that we can replace the sadness with joy. And sometimes, it doesn’t even take much.

The body is a wondrous miracle. Often when it fails us or when it’s harmed, we appreciate it even more. But each time I look at my baby’s scars – slowly but surely getting smaller – I’m reminded of the blessing of our bodies.

We recite in a prayer about such wonder:

Blessed are You, God, Healer of all flesh, who makes the wonders of creation.

May You continue to heal her flesh.

May You continue to make us wonder.

May You continue to replace the pain with joy.

So today, just before bedtime, I watched my younger daughter play with one of her doll babies. First she changed the baby’s diaper. Then, pushing her baby in a stroller, she played doctor with her baby. She caught our attention, pointing to the baby and said: “she’s got a boo boo – a burn – but she’ll be okay.”

My heart sunk, as if she had known what happened to her a year ago today. 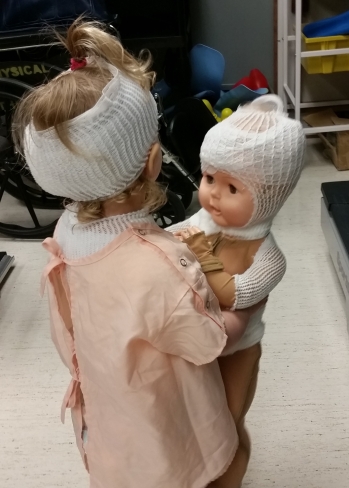